Action all over Victoria this Saturday 18 October

In the city of Melbourne: It’s Divestment Day. Market Forces and 350.org are calling on thousands of customers of ANZ, Commonwealth Bank, NAB and Westpac to turn out and publicly close their accountsTell the big four banks: “If you choose fossil fuels, we’ll choose another bank!”
Starting at 11:00am at Federation Square, opposite the Swanston St tram stop.
» Sign up atwww.marketforces.org.au/divestmentday.

In the sandbelt and Forest Hill: Environment Victoria and GetUp! are having a huge day of action with door-knocking, street stalls and bike billboards across the electorates of Frankston, Mordialloc and Carrum. They will be asking voters to sign pledge cards.

» To get involved email jane.stabb@environmentvictoria.org.au. 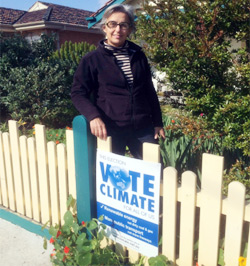 In the ALP/Greens marginal seat of Northcote: join Darebin Climate Action Now at the Fairfield Farmers Market all morning, then come door-knocking to help with the 100 house signs challenge. DCAN are door-knocking priority areas for house signs, including main roads, and houses near schools, railway stations and polling booths. This is a very satisfying form of door-knocking with around one third of those who answer the door being willing to take a Vote Climate house sign. Then on Sunday, it’s house sign delivery day. And Monday will be data entry night! Altogether, grassroots groups aim to find fences for 300 Vote Climate signs. Inner city groups need help from climate groups in non-marginal seats.
» Please email DarebinCAN@gmail.com, climateactionmoreland@gmail.com or www.ycan.org.au/contact

In the Macedon Ranges: join the Ride for Renewables from Black Forest Timbers, 988 Black Forest Drive, Woodend. The ride offers options for the semi-serious mountain-biker as well as those that are interested in a leisurely 13km ride through the pine forest. Starting at 10.00am (staggered start), riding to the site of the proposed community owned wind turbine and through surrounding forest.
» Go to www.mrsgonline.org.au/events/r4r and book your tickets.

Lots of action against coal and gas

AGL offices were occupied in collaborative action by many groups – just the first of many such actions to come.

In Warnambool, on Global Frackdown day, 50 people and a life-like drill rig paraded though town and posted a message on Denis Napthine’s electorate office. Gas exploration is heating up as a hot topic in the Glenelg Shire communities, particularly in Portland and Casterton. Unfrackabool are putting pressure on Warrnambool City Council take a stance against fracking.

ANOTHER Victorian district has labelled itself ‘gasfield free’.
More than 200 people from Wellington and East Gippsland shires converged at the Meerlieu and districts declaration day to celebrate with a ‘No gasfields’ sign made out of utes.
» Read more

Geelong: Several Frack Free groups in the region have been campaigning hard with film evenings, information nights, photo shoots, social media and radio shows, letterboxing, a survey in four communities, a petition, and endless streams of letters, media releases and newsletters in about a year, culminating with a submission process in Council, which received 447 submissions against fracking and only one in defence of it. On 14 October 2014 the city council made a formal decision to reject fracking and call for a permanent ban on onshore gas extraction in the region. On 28 October the council is expected to launch its new Environment Management Strategy which is based on the One Planet Living principles, one of which is the Zero Carbon principle.
» Read more: www.frackfreegeelong.org

Moreland: The City of Moreland has become the first council in Victoria to rule out direct investments in fossil fuels and the first council in Australia to start developing a strategy to move investments away from financial institutions that fund fossil fuel developments. Moreland joins around 30 cities internationally which have made similar commitments, including Seattle, Dunedin, and Oxford.
» Read more:www.climateactionmoreland.org


The Pacific warriors have arrived 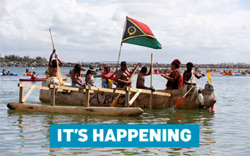 After months of preparation and planning, 30 Pacific Climate Warriors just launched their traditional canoes into the water in Newcastle. They are paddling into the oncoming path of coal ships in an attempt to shut down the world’s largest coal port for a day.
» You can follow the action on 350’s live blog right now

Send a powerful message to the fossil fuel industry that there are others who are joining the Warriors on this fight:
» Add your name to the petition

» Join the Pacific Warriors on Wednesday 22 October from 6:30pmat RMIT Cinema, Level 1, Room 002, 445 Swanston Street. The event will be part story-telling, part performance and a call to action.
» Registration page.


Lots of action on renewable energy 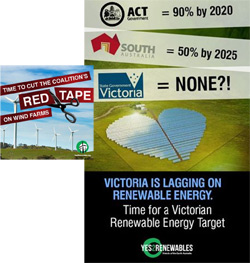 Yes 2 Renewables have been working with Macedon Ranges Sustainability Group to get renewables on the agenda in the state election. They asked local candidates, Jo Morabito (Independent), Donna Petrovich (Liberal), Mary Ann Thomas (ALP) and Neil Barker (Greens) their views on wind farm restrictions and a a Victorian Renewable Energy Target of at least 33% by 2020 and the candidates replied.
» There’s a petition calling for a Victorian RET. Please sign it.


A victory on energy efficiency

The Napthine Government has been trying to introduce legislation to scrap the Victorian Energy Efficiency Target (VEET), which is undermining the profits of big coal generators by reducing energy demand. Environment Victoria ran a short, sharp campaign including more than 3000 messages to Denis Napthine, Daniel Andrews and key Frankston Independent Geoff Shaw. Hundreds of Frankston locals called Mr Shaw’s office. They garnered media interest in the issue with stories in the Age, the Frankston Leader, on ABC radio and elsewhere. And they worked to get commitments from the ALP to move amendments to defeat the government’s legislation and retain the VEET target. Knowing that they didn’t have the numbers, the Napthine Government buckled and withdrew their legislation from Parliament. This means that the existing VEET target of 5.4 million tonnes of emissions reduction will stand for 2015.However if the Napthine government is re-elected it has said it will again attempt in the next Parliament to pass legislation to scrap the scheme.
» Read more.

And in other election news …

An interview with Victorian energy minister, Russell Northe, on ABC talk-back with Jon Faine provides more hints that coal seam gas mining may go ahead under Liberals. Listen to what he had to say about the CSG moratorium here. He said that personally he’s on the fence about the industry. He got slammed in the text messages afterwards. He was on radio to launch a new tool on www.energyandresources.vic.gov.au which, if you give enough time to load, shows the most of the state covered in mining licences!

At the Forest Hill candidates forum, run by Eastern Climate Action Melbourne and supported by Environment Victoria, about 140 people heard Liberal incumbent, Neil Angus, Labor’s Pauline Richards and Greens candidate Brewis Atkinson lay out their party’s environmental credentials and take questions on climate change, renewable energy and brown coal exports. Pauline Richards and Brewis Atkinson both unequivocally supported the scientific consensus on climate change, while Neil Angus avoided answering direct questions about his personal beliefs, instead referring to his government’s policies. On all climate change related questions, Neil Angus referred to the government’s Climate Change Adaptation Plan. He avoided responding to a question on why the state government emphasises adaptation over mitigation. Many in the audience laughed when he spoke of his government’s indirect support for national emissions mitigation efforts through the Commonwealth’s Direct Action Plan.
» Read moreForest Hill MP heckled as candidates quizzed on environment

A sincere apology to Lighter Footprints for accidentally leaving out their group report last time. Their group of 26 champion letter writers have letters published frequently and on 9 October excelled themselves with four letters in The Age!
Is that some kind of record? Please support the hard work of this by coming along to their candidates’ forum on Wednesday 12 November at Hawthorn Arts Centre from 7:00–9:30pm. It’s a big venue!
There will be a Q&A panel and breakout groups for candidates from Kew, Hawthorn, Burwood, and Box Hill.

Saturday 18 October. Divestment Day. Market Forces and 350.org are calling on thousands of customers of ANZ, Commonwealth Bank, NAB and Westpac to turn out and publicly close their accounts if the banks fail to rule out further support for the dirty fossil fuel industry. » Sign up atwww.marketforces.org.au/divestmentday

Saturday 18 October. The Macedon Ranges Sustainability Group pro-wind mountain bike ride – a Ride for Renewables from Black Forest Timbers, 988 Black Forest Drive, Woodend. The ride offers options for the semi-serious mountain-biker as well as those that are interested in a leisurely 13km ride through the pine forest. Starting at 10.00am (staggered start), riding to the site of the proposed community owned wind turbine and through surrounding forest. » Go to www.mrsgonline.org.au/events/r4r and book your tickets, or email R4R@mrsgonline.org.au. » Facebook event page: www.facebook.com/events/521386021326146/

Sunday 19 October, 11:00–4:00pm. Whitehorse Spring Festival in Nunawading. Environment Victoria market stall, with Concentrated Solar Thermal model on display along with a stack of yard signs for people to take.

Monday 20 October 2014 at 6:30pm. Breakthrough – the new era of climate activism. Already nearly 400 people have registered for this important rare opportunity to hear Paul Gilding, inspiring speaker and author of The Great Disruption, in Melbourne. Don’t miss out. Explore a new era of climate activism that is changing everything about the way we campaign on climate change. Hear from David Spratt on climate disruption and Mark Wakeham on ways for environmental NGOs to respond to the rapid economic transition required to restore a safe climate. Organised by Environment Victoria and the Sustainable Living Foundation. RMIT University Building 80, Level 1, 80/445 Swanston St, Melbourne. »Register at www.breakthrough2014.org

Friday October 24 to Monday 27 October. Beyond Coal and Gas Conference: Protecting our Heritage, Embracing the Future at Ivory’s Rock, near Ipswich Queensland. It has been a huge year for the campaign to move Australia beyond coal and gas, with the movement growing from strength to strength across the country. The national gathering is a chance to bring people together from all over Australia, to reflect, to share stories and experiences, to learn from one another and to plan how to take the movement to the next level. Speakers include US based solar entrepreneur Danny Kennedy, the founder of Sungevity, and Dr Anne Poelina, a Nyikina Traditional Owner from the Mardoowarra, Lower Fitzroy River. » Website and registration.

Sunday 26 October. State election candidates get chance to reveal CSG stance. Coal and CSG Free Mirboo North is holding a forum for candidates at the state election to explain their policies on unconventional gases. All parties contesting the seat of Gippsland South will take part, including the sitting MP and Deputy Premier, Peter Ryan.
» www.facebook.com/CoalAndCsgFreeMirbooNorth.

Saturday 29 November. Will Victorians see climate as one of the decisive issues?

VCAN News in your mailbox

You can subscribe to this newsletter and receive it directly in your mailbox.

VCAN Newsletter mid-October is out – with lots of action news! – on http://t.co/95N3P6DCas @climatenews pic.twitter.com/MxwjnW8rNp

About the Author: Web Editor